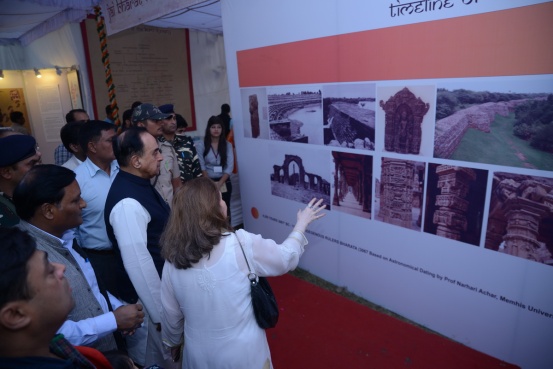 Pramod Kumar
In order to acquaint the countrymen with the rich cultural heritage of Indraprastha, the ancient city of Pandavas, the Draupadi Dream Trust and Union Ministry of Culture jointly organised Indraprastha Festival at Purana Quila and National Museum in New Delhi from November 18 to 25. The week-long event drew not only the international scholars, historians, reputed archaeologists, experts from the field of arts and culture, but also the school and college students in a good number. Art of Living founder Sri Sri Ravi Shankar also joined the event and extended his support to the cause of reminding people of their glorious past.
Inaugurating an Exhibition at Purana Quila on November 18, former Union Minister Dr Subramanian Swamy said the initiative should ensure that Delhi regains its original name Indraprastha, for which he assured to introduce a proposal in the Parliament. The exhibition, organised in association with the Archaeological Survey of India (ASI), effectively showcased the rich cultural heritage of Bharat. The exhibition titled as “Indraprastha: Journey to an Ancient City” was divided into various sections like
geographical concepts of ancient Bharat, display of Dwapar era evidences, maps showing continuity of Indraprastha, evaluation of all 18 chapters of Mahabharata, evidences showing how Indraprastha was built, evidences of ancient, medieval and modern cities of Indraprastha and different literary, historical, gazetteers, archaeological evidences.
The journey into glorious past was followed by colourful cultural programme which began with a powerful anthem devoted to Indraprastha glory and its significance. The anthem was sung by Shibani Kashyap and Aryan and the lyric was jointly composed by Sushri Neera Mishra and Aryan. This followed the spectacular Wayang Kulit by 15 artists from Bali. They performed the centuries old folk of South East Asia through which the artists there still narrate epic history of Mahabharata and Ramayana.
One of the fascinating attractions of the festival was ‘Kala Anjali’, a tribute through paintings by selected artists including Rajesh Bhaderia, faculty and students of Amity College of Fine Arts. They drew fine works on omni present (Sri Krishna), Bhishma on bed of arrows, the dice game, Draupadi, five Pandavas and Draupadi at the Yamuna River. A scholarly film on Indraprastha was specially made by the IGNCA. On November 22 evening, Draupadi Dream Trust presented its own production Draupadi Antarkatha, a dialogue between Sri Krishna and Draupadi on the status of women. 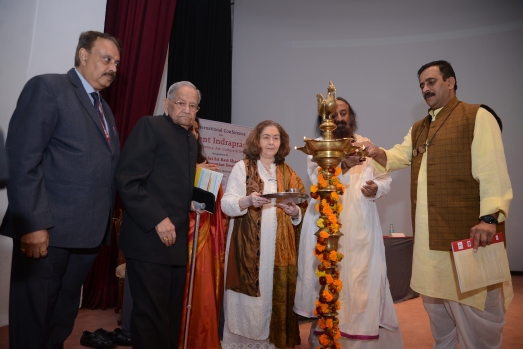 November 22 and 23 were devoted to the first International Conference on Ancient Indraprastha, organised at National Museum. The conference had a spiritual beginning with blessings from Sri Sri Ravi Shankar, who appreciated the efforts saying “love for heritage comes from the heart and has lasting impact”. He felicitated Prof BB Lal, Director General of National Museum, Dr BR Mani, writers and composer of Indraprastha Anthem, Aryan and his team, Gen (retd) GD Bakshi, ICHR Chairman Prof YS Rao. Since the history of Indraprastha cannot be visualised in isolation from the great epic Mahabharata, matters relating to that epic were deeply discussed by the experts at the conference. They agreed that there are enough archaeological and literary evidences to establish the historicity of Mahabharata as well as the correct identification of Indraprastha.
Prof BB Lal established the identity of present Purana Quila areas to ancient Indraprastha region of the Pandava brothers. He said in the revenue records of Delhi, Purana Quila is mentioned as Indrapat. Further, up to the beginning of 20 century there used to be a village within its premises. It was called Indrapat, a name evidently derived from ancient Indraprastha. The fortifications at Purana Quila were built by Humayun or Sher Shah along the periphery of the 10-metre high ancient mound. In order to find out the archaeological contents of this mound, excavations were carried out twice, once in 1954-55 and again in 2013-14. These excavations have revealed, from top downwards, structural and other remains of the Rajput, Gupta, Kushan, Sunga, Maurya, Buddha periods, right down to the Painted Grey Ware Culture, which goes back to circa 1100 BCE, if not somewhat earlier. “Here it needs to be emphasised that the Painted Grey Ware Culture characterises all the sites associated with the Mahabharata story, for example Hastinapura, the capital of the Kauravas or Mathura, the birth-place of Lord Krishna, or Kurukshetra where the War was fought. Thus, the archaeological evidences fully confirm that what goes by the name of Purana Quila today is indeed Indraprastha of the Mahabharata times,” Prof Lal added.
Prof Lal, however, expressed concern that the excavated remains are not open for the public to see them. “It is absolutely necessary that the ancient remains are re-exposed by removing the dumped earth, suitably showcased, conserved and protected from the elements. Further, in order to duly disseminate this newly acquired knowledge it should be taught in textbooks and tourist literature. 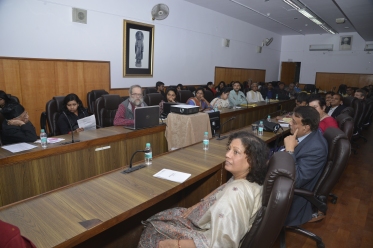 Former Director of Monuments in ASI Shri KK Muhammad stressed on the need of protection and acquisition of the land having archaeological and historical importance of ancient period related to Vedic and epic period. Joint organising secretary of Bharatiya Shikshan Mandal Shri Mukul Kanitkar stressed on the active role of youth in preservation and promotion of the cultural heritage and its value systems of respect towards all humanity, nature and environment.
Director General of National Museum Dr BR Mani presided over a session on Archaeology and History. Another session was chaired by Chairman of Indian Archaeological Society of Shri KN Dikshit. Dr Koenraad Elst spoke on the convergence of evidences on a chronology of Mahabharata war. Chairperson of National Monuments Authority Prof Sushmita Pande, former Head of the Sanskrit Department in Delhi University Prof Ramesh Chandra Bhardwaj, Prof Narhari Achar from Memphsis University USA, Dr Yvette Claire Rosser (Ram Rani) also spoke.
The scholars unanimously demanded to set up an institution to organise annual Indraprastha National and International Festival of Arts and Sports dedicated to the promotion and cultivation of traditional artistic, which could be called as ‘Indraprastha Games’ involving the participation of countries sharing the Indic heritage of Vedic culture, Sanskrit epics, Buddhism, etc.
The week-long festival was successful in generating the sense of preserving the cultural heritage.